Its been a while since my last post as I was busy in the lab and field preparing for the Delta Science Conference (Nov. 15-17 2016)  in Sacramento, Ca (and then of course the holidays happened!). The  Delta Science conference was terrific, I met a lot of great and friendly researchers from many different agencies and institutions.

Here is the link to my abstract for the conference.

At this conference, I discussed my work as a Delta Science postdoctoral fellow, working with Paul Pratt’s laboratory at the USDA on understanding mechanisms for effective biological control of water hyacinth, with a focus on the weevil Neochetina bruchi.

A manuscript on our latest findings is being prepared for submission-but for now keep reading below for a brief overview and update on my work. Also related to this blog is a recent post of mine on the UCANR DRAAWP Blog (Link).

In the Sacramento-San Joaquin River Delta, biocontrol agents for waterhyacinth were first introduced in 1983, including two weevils (Neochetina bruchi and N. eichhorniae; Coleoptera: Curculionidae) and a moth (Niphograpta albiguttalis; Lepidoptera: Pyralidae). More recently (2011-2013), a planthopper (Megamelus scutellaris; Hemiptera: Delphacidae) was released in the Delta. Although biocontrol of waterhyacinth has been successful in other regions, the current biological control agents have not performed at acceptable levels in the Delta.

I am investigating both abiotic and biotic mechanisms that may be hindering biological control of water hyacinth in the Delta, with a particular focus on the weevil N. bruchi. Potential mechanisms that I am investigating include: 1) the effect of cold temperatures on the weevil’s growth, survival and performance; 2) the presence of pathogens in N. bruchi; and 3) population genetics – including investigating the potential of genetic bottlenecks and/orhybrid-breakdown (via hybridization with N. eichhorniae), and a search for cold-adapted biotypes (this work in combination with temperature performance experiments). All of these objectives aim to improve biological control of water hyacinth in the Sacramento / San Joaquin Delta.

Paul Pratt’s Lab at the USDA and I conducted monthly surveys for one year at 16 sites distributed throughout 1667 km2 of the Delta to determine the resulting establishment, abundance and distribution of these introduced herbivores, and to assess pathogen prevalence and load.

So far, I have designed COI markers (with the support of Kent McCue at USDA) to differentiate the two species of Neochetina weevils. We are in the process of publishing this work with others at the USDA and submitting these to GenBank. This is important work, as the morphological characteristics identifying these two species are not always clearly distinguishable (see images ‘C’ & ‘D’ below).

Morphological identifications, and sequencing of 616 bp the mitochondrial cytochrome oxidase subunit 1 (COI) gene, determined that both weevil species are still present in the Delta region, with 94 SNPs between the consensus sequences of these two species (accession numbers for sequences on GenBank coming soon). From all of the study sites, 96.6% of the examined weevils were identified as N. bruchi, and all of the 3.4% N. eichhorniae were recovered from two sites just south of the legal Delta (near Modesto, CA). Microsatellite marker development is underway. Once this is complete, I will be able to determine whether hybrids of N. bruchi and N. eichhorniae exist in the Delta, examine whether genetic bottlenecks of these biological control agents exist, and identify genetically distinct populations of the two Neochetina spp. around the globe.

In addition to determining that both weevil species are still in the Delta region, we found extensive spatial and temporal patterns of weevil densities in the Delta and its associated river systems. To properly analyze these spatial and time-series data, I had to use a GAMM (Generalized additive mixed model) and multiple GAMs (Generalized additive model) since the data are not linear (the densities of weevils fluctuate through time). It was initially difficult to settle on which analysis would be best for analyzing non-linear data and including space and time together in the analysis….but thank goodness for R (the statistical program), and the mgcv and gamm4 packages in R, as well as helpful folks including Chris Paciorek at UC Berkeley and my cousin and mathematical modeler Danny Klein that gave advice!

This was a new statistical analysis that I had to learn during the beginning of my postdoc, which is great since life is about always growing and learning! For the full model testing the interaction of spatial and temporal effects on weevil densities, I first projected the longitude and latitudinal coordinates of 15 study sites (we removed the Folsom site as an outlier) to WGS84 with the proj4 vs. 1.0-8 package and used a tensor product smoothing function to examine the interaction between space (the projected spatial coordinates) and time (numerical months), with a Poisson error distribution to account for the density count data, with continuous autoregressive correlation of sampling months (temporal autocorrelation). In this model, study site was specified as a random effect to account for temporal pseudoreplication. Following the full model with GAMM that found a significant interaction between spatial and temporal effects, I used separate GAMs to determine temporal effects on weevil densities within each study site with continuous autoregressive correlation of sampling months. Since GAMs cannot produce log likelihood estimates, parameter significance was obtained from the model directly and the values are embedded in each study site panel of the below figure. Site Codes in the below figure match the site codes in the above study site map. 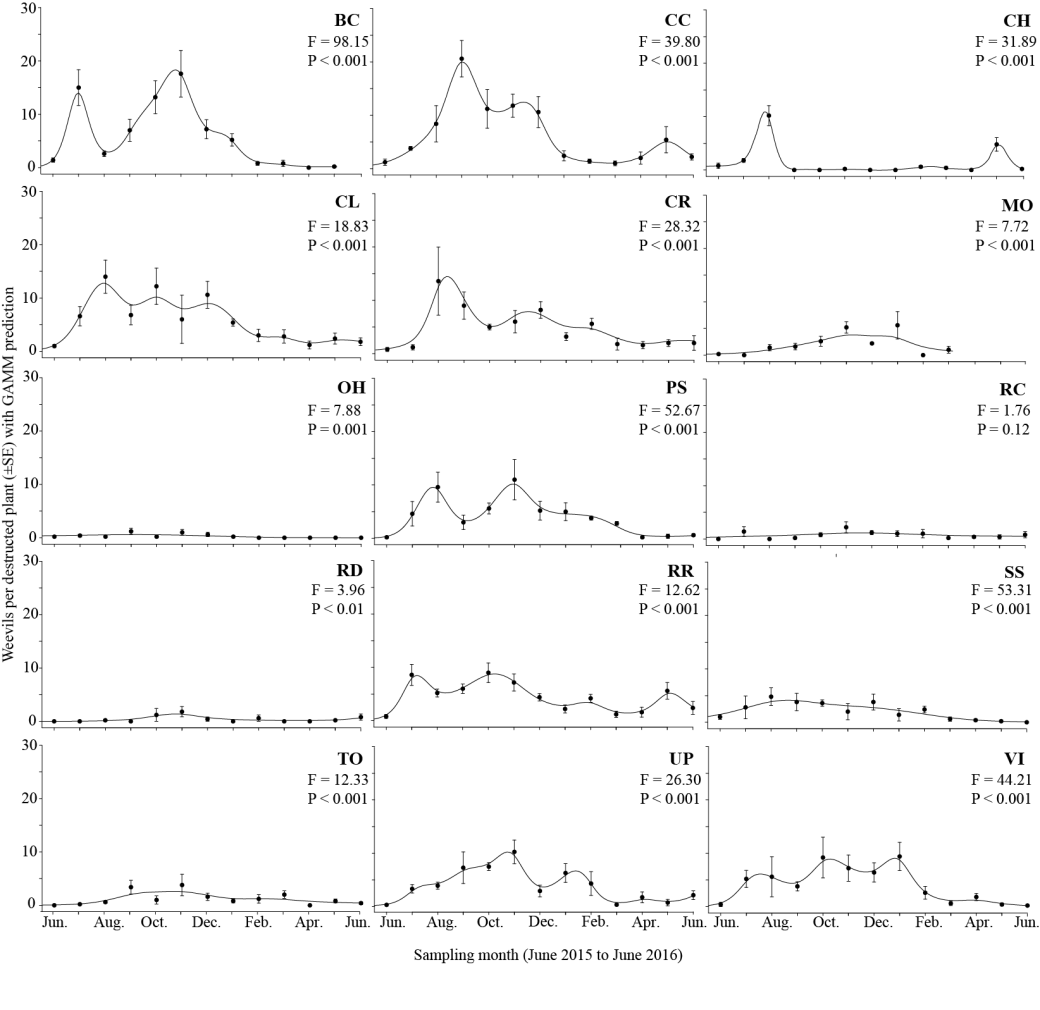 Lastly, as I mentioned in a previous post- we have confirmed the presence of a microsporidian pathogen in Neochetina bruchi in the Delta with spatial and temporal variation in prevalence (across 3 seasons) and abundance. Below you can see how prevalence of microsporidia varies across time for each of the 16 study sites. Abundance is fairly low, so it is unlikely that this pathogen has a large impact on Neochetina bruchi in the Delta at this time- but we still have more sampling to do until we can be sure. 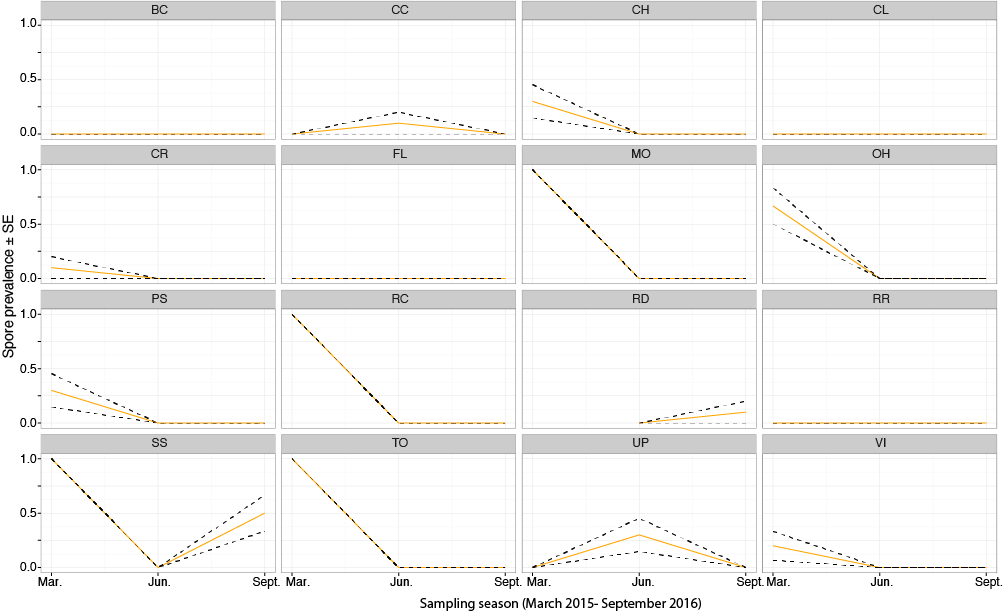 Please stay tuned for more updates, and the exciting microsatellite results on population genetics of the two Neochetina weevil species!

Support for this research was provided from the USDA Delta Areawide Program (http://ucanr.edu/sites/DRAAWP/) and by the Delta Stewardship Council Delta Science Program under Grant No. 2271. Any opinions, findings, and conclusions or recommendations expressed in this material are those of the authors and do not necessarily reflect the views of the Delta Stewardship Council or of USDA.