So… you want to use microsatellite markers to assess the genetic variation and population structure of your focal study organism? Well if you are anything like me two years ago.. then you have no idea where to start. Otherwise- congratulations if you are already an expert- in which case you probably don’t need to read on 🙂

Two years ago, I was just like you (and these weevils above), and felt a bit overwhelmed and lost in undertaking the large task of designing microsatellite markers and genotyping these markers for the two weevils species (Neochetina bruchi and N. eichhorniae) that I have discussed in previous posts.

Very briefly to recap on my work:  these two weevil species are used all over the world for the biological control of the invasive water hyacinth, including the Sacramento-San Joaquin River Delta, California. They have had variable success, with notable reduction of biomass and cover of water hyacinth in warmer climates compared to more temperate climates such as the Delta. Although temperature plays a large role in their success, I am also investigating the role of genetic variation and particularly whether there is lower genetic diversity and heterozygosity in the Delta compared to the native origin of these weevils (Uruguay and Argentina).

In Part I- (this blog), I will detail the how-to’s of sampling design and strategy, and the development of (or outsourcing) microsatellite markers.

In Part II- (next blog) I will discuss how to make your final microsatellite marker selections, and the workflow of multiplex PCR and genotyping.

In Part III- (come back in a month!) I will detail how to analyze the data with various R-packages and other computer programs, and how to format the data files correctly for these programs.

On this note, please research your study system thoroughly, as every organism is different and may require different sampling strategies and methods than I detail here for two diploid beetle species (Insecta). Additionally.. my overview below on Part I- is very brief and I definitely skip small steps to be succinct. Also my suggestions are not the only way to do things and below this blog, I post links to several other great resources. Lastly- This work is currently in prep for publication and I will post an update again after publication.

First before you start sampling or ordering primers- make sure that you have a solid study question with a testable hypothesis, and a good study framework.

Next: all of the power in your genetic analyses (aka, accuracy and ability to detect differentiation among populations, etc.) depend on: 1) your sample quality (aka DNA quality), the number of samples (replicates) per treatment or location, 2) the number of high quality microsatellite markers (e.g.quality relating to two important characteristics: markers are polymorphic -having 2 or more alleles per locus-with more being better, and the markers lack true null alleles), 3) the robustness of your PCR  – whether the PCR conditions are truly suitable for your markers, and whether they can result in reproducible data, 4) the assumptions of the data and 5) the choice of statistical tests and whether the tests are truly suitable for the data.

I will cover the latter (regarding statistical tests) in a future blog, but for today I would like to focus on the ideal # of samples and the # of polymorphic markers. There has been debate about how many samples and how many markers are necessary for robust studies, and if you study an endangered species -sometimes you just have to work with what you got!

In a perfect world– you will want to make up for what you lack in samples with microsatellite markers (loci) and vice versa. So if you have a lower end of replicates, then you will want a higher number of microsatellite markers (# of loci, and more important is to have polymorphic loci with 2 or more alleles/locus) to test for each individual (replicate), and again vice-versa. There are a couple great papers that discuss sampling strategies and study design that you should definitely check out, particularly the one noted in the figure above (Grunwald et al. 2017), as well as Hale et al. 2012 which states that 25-30 individuals per population should be sufficient to accurately estimate allele frequencies given population (with some caveats). Caveats being that obviously, 25-30 individuals per population would likely NOT be enough if you only have four microsatellite markers, particularly if these markers are not polymorphic or very variable (variability referencing to the # of alleles per locus- the more the better!).. so keep this in mind. In general, with that many samples- 10-15 polymorphic markers should be fine (although the more the better), but again this depends on your study question and study system. Also, more samples might be necessary if you are interested in population differentiation (population genetic structure). In fact, in a landscape genetics study, Landguth et al. 2012 demonstrated that increasing the number of loci (and particularly having more variable loci) is more likely to increase the power of population genetic inferences compared to increasing the number of individuals.

You can also test your samples with genotype accumulation curves to see if you have captured the majority of genetic variation (I used the poppr package in R for this and will discuss more on poppr and its primer in Part III of this blog series).

With that said.. If I would have known 1 year ago what I know now…. I would have asked for folks around the world to collect more weevils for me, and I would have extracted more DNA!  Just remember.. not all of your DNA extractions are going to end up working out..due to various human error and/or preservation issues. Thus its always good to add at least 10-20 more samples than you think you need!

Helpful Resources on Getting Started for Part I

Lecture on Intro to Microsatellites

My newest publication on the current state of biological control of water hyacinth in the Sacramento-San Joaquin River Delta is hot off the press! (Journal of Biological Control)

Here is the link to the publication, and you can read it and download it free of access for 50 days! (after that just shoot me an email and I’ll send you a copy if you are interested).

This manuscript is a product from some of my work, and collaborations, from the past year that I described a bit in an earlier blog post .

I could not have done this without the help and mentorship of many folks at the USDA, including Kent McCue, Patrick Moran, and Paul Pratt, USDA Research Leader and a specialist in the biological control of aquatic weeds. There were also some very amazing technicians at USDA including Matt Perryman, Caroline Nunn, Anna Beauchemin, Ethan Grossman, and Clayton Sodergren who put a lot of work into this research as well.

Below is a figure (ArcGIS work by Clayton Sodergren) highlighting the spatial variation in peak weevil densities (Aug-Nov. 2015) in the Delta, as well as demonstrating the variation in the abundance and distribution of the two weevil species (Neochetina bruchi and N. eichhorniae).

Its been a while since my last post as I was busy in the lab and field preparing for the Delta Science Conference (Nov. 15-17 2016)  in Sacramento, Ca (and then of course the holidays happened!). The  Delta Science conference was terrific, I met a lot of great and friendly researchers from many different agencies and institutions.

Here is the link to my abstract for the conference.

At this conference, I discussed my work as a Delta Science postdoctoral fellow, working with Paul Pratt’s laboratory at the USDA on understanding mechanisms for effective biological control of water hyacinth, with a focus on the weevil Neochetina bruchi.

A manuscript on our latest findings is being prepared for submission-but for now keep reading below for a brief overview and update on my work. Also related to this blog is a recent post of mine on the UCANR DRAAWP Blog (Link).

Let’s face it – not everyday in the life of a scientist is filled with exciting and important discoveries. (And if this is not true for you – please share your secrets with me!)

Below is a photo of microsporidia (Nosema fumiferanae postvittana subsp.n.) from the Light Brown Apple Moth that I took during my PhD work. The mature spore form of the microsporidia in the weevil, Neochetina bruchi, look very similar under the microscope. .but so far I have not been finding high intensity infections … rather just 1-2 spores per slide for each weevil. Thus you can imagine it would be hard for a new intern to spot these little critters amongst all the other junk in a dissected bug.

2. After training my new undergraduate intern, and a quick lunch- I proceeded to spend about the next 4 hours (can you believe that?! 4 hours?!) building a large cage for a bunch of weevils that an amazing technician brought back from the field for me. I had to build a large cage to make sure the weevils don’t fly off these plants and start eating other water hyacinth plants that were specifically being maintained as ‘healthy/clean’ for experiments.

The goal is to mass rear ~ 8000 weevils before February among these tanks and some others that I have going right now…. fingers crossed! 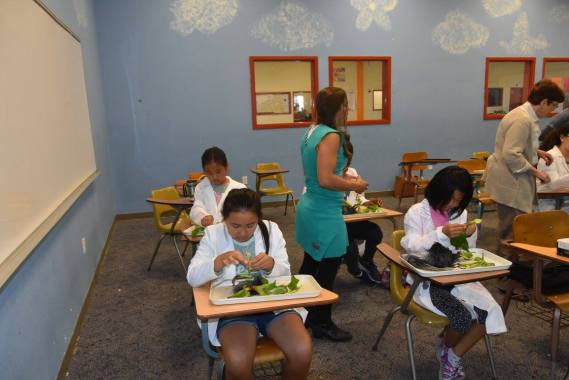 As part of my Delta Science Postdoctoral fellowship-  I work with several community mentors at the USDA, Department of Water Resources and NASA, in addition to working under Dr. Ted Grosholz at UC Davis. Through these mentors, I have had the awesome experience of attending several interagency meetings on how to combat invasive aquatic weeds in the Delta- as well as discussing other issues of concern in the Delta. An interagency group that I frequently interact with is DRAAWP (the Delta Region Areawide Aquatic Weed Project). I recently posted a blog on DRAAWPs website  about some outreach I did to promote young girls in STEM science through the Greenlight 4 Girls workshop in Richmond, California in August.